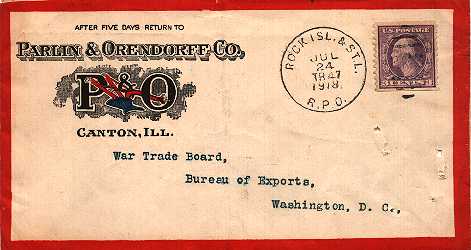 This cover has more than one feature in its favor, as far as I am concerned:

(1) It was mailed during the First World War period, an area that I am studying with great interest.

(2) The cover has a Washington-Franklin stamp on it, and the stamp is a coil.

(3) The stamp was cancelled by a RPO handstamp, which indicates that it was processed in a moving rail car. During the War period, there was a shortage of RPO clerks due to their being called to arms. However, at the same time there was a sudden explosion of mail volume, primarily due to all the soldiers being trained at camps in the U.S.

(4) This cover is an excellent example of an illustrated advertising cover, showing a colorful image of a plow with fine ornate lettering.

(5) Finally, the addressee (the War Trade Board in Washington, DC) gives it added interest since it illustrates the careful control of exports exercised during the First World War period.

The history of the RPO service is both fascinating and amazing. Each RPO car (usually coupled directly behind the locomotive) was full of clerks, sorting the mail "on the fly" shoulder-to-shoulder, as the train speeded and rocked its way between the cities and small towns of the United States. These clerks were expected to know the sorting schemes for all cities and rail routes for the mail they were handling. Using these "human computers", it was possible for the Post Office to achieve overnight first class mail service between most cities East of the Mississippi.

This collection of images includes another RPO cover example, as well as a RPO marking on a special delivery item.

The postal history of the Railway Post Office is of particular interest to members of The Mobile Post Office Society.