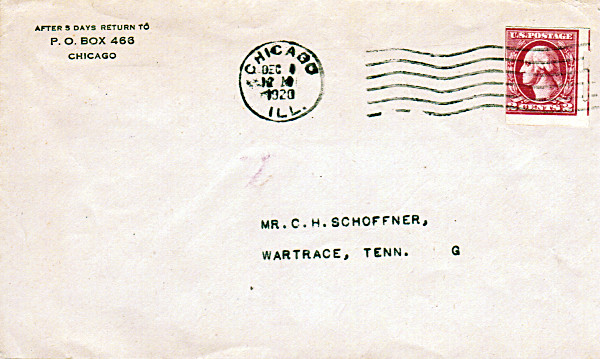 This is an on-cover example of a single copy of a two-cent Washington issue. The stamp was issued imperforate, but has been perforated privately for use in the Shermack affixing device (called type III by collectors). A more detailed image of this type of stamp is shown below.

The distinct perforations are necessary for use of the Shermack affixer device. A coil of pre-punched imperforate stamps was fed into the device, and it would dispense one stamp at a time onto an envelope. These devices, and the distinct stamps, were almost entirely used by businesses to speed up the process of preparing their often-voluminous mailings.

The stamp is given the number 534B by the Scott catalog. It was produced by offset printing, and is given the design type VII. Until the First World War, stamps were produced by engraving, like currency. However, the government decided that it needed faster stamp production, so turned to offset printing using photographic design and processes. This change produced a number of distinct stamp design varieties during and after the War.

The stamp is cancelled by a Universal machine of the main Chicago Post Office, dated December 1, 1920. This is very probably business mail, not only because of the Shermack stamp affixer, but also because the envelope is addressed by some mechanical device, such as an Addressograph.

These stamps on cover fascinate me, due to the endless variety in both stamp color and usage. I am always interested in the "story" told by the cover, that enhances my interest beyond the stamp itself. 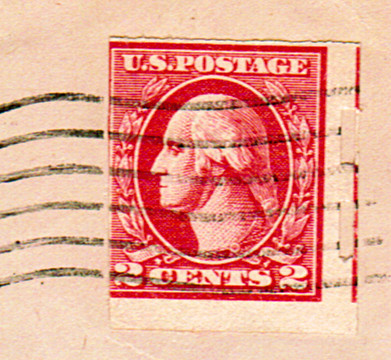