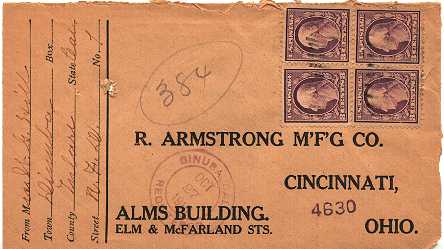 This is an on-cover example of a multiple of 4 of the three cent Washington stamp from the first issue of this long-lived series of definitive stamps. This stamp is given the Scott number of 333. The franking of 12 cents pays for First Class mail and Registration. The cover was cancelled October 22, 1910, while the first issue of Washington head stamps was available.

There are a couple of interesting aspects to this cover. For instance, it was mailed from Dinuba, California, not a common town in that era. The double circle handstamp of Dinuba is on the front of the cover, which is not correct handling. Registered mail was supposed to only be marked on the back, as it traveled from sender to receiver. By the way, I can tell that it is a registered cover (rather than special delivery), because there are registry numbers entered on the face. There appear to be two separate numbers, one hand-written, and the other rubber stamped. It is possible that the rubber stamp was applied by the factory that received the letter (probably a merchandise order), as a docketing. The hand-written, circled number is probably the registry number, since the Post Office at Dinuba did not process very many registered items. The return address on the envelope shows that the customer was in a RFD (Rural Free Delivery) route. There is no other obvious marking, however, to show whether this item actually originated on the RFD route. If that were the case, this would be even rarer than it is.

These stamps on cover fascinate me, due to the endless variety in both stamp color and usage. I am always interested in the "story" told by the cover, that enhances my interest beyond the stamp itself. Other examples of these type of stamps can be seen at Washington-Franklin stamp usage examples.